According to the breed standard, established by the Labrador Retriever Club, Inc., there are three acceptable colors of Labrador Retrievers. Those colors are Black (all black), Yellow (fox-red to light cream), and Chocolate (light to dark chocolate).

Silver is not an acceptable color of Labrador Retriever and is a disqualifying fault.

Based on an agreement in 1987 between the American Kennel Club and the LRC, it was agreed that there was no proof that these silver dogs were not purebred and the breeders of the silver dogs subsequently registered them as chocolates.

Using parentage testing, it cannot conclusively be proven that silver Labradors are not purebred dogs or are crossed with Weimaraners. The Labrador Retriever breed does not carry the dilute gene dd that appears universally in the Weimaraner and is responsible for silver color.

Responsible breeders are tasked with breeding for health and standard and not solely for aesthetic.

While we respect the choice of pet owners to select the breed of their choice, the LRC, Inc. does not view silver Labradors as appropriate breeding stock and believes that they should not be bred. They may compete in AKC events but are disqualified from the conformation show ring.

The facts, moralities, and legitimacy behind Labrador breeding

Here are the facts, anything else is conjecture, guessing, speculation, or simply incorrect. Since you all can read the lies which have been addressed previously, there is no need to rehash them other than to say, “consider the source.” When a group relies on lies to further their agenda, everything they say must be considered as tainted in the same manner as their revealed lies have been.

The Labrador is descended from the St. John’s dog, not a breed, but a landrace from Newfoundland, Canada. A number of St. John’s dogs were imported by sportsmen into Great Britain where the lines remained basically pure in the breeding kennels under the dedication and care of the Earl of Malmesbury and and Duke of Buccleuch. The St. John’s dog was not a dilute dog and was the progenitor for all the modern retrieving breeds developed in Great Britain at that time, most notably the Labrador Retriever, the Golden Retriever, and the Flat Coated Retriever (colors produced in these breeds were limited to black, liver, and yellow). Despite what some dilute supporters claim, as evidenced in meticulous record keeping, breeding and whelping logs, and descriptions of all colors, markings, etc, there was never any mention of dilutes appearing in any of the Retriever breeds based on the St. John’s dog.

The Labrador Retriever was officially recognized and registered first in the country where it was developed, Great Britain, in 1903. The predominant color was (as it remains today) black, but chocolates and yellows have always been legitimately in the breed. Subsequently, the Labrador Retriever was imported into North America and gained recognition and registration by the AKC in 1917. The rest of the world soon followed suit and Labradors have since grown in popularity from 23 dogs in the USA in 1928 to 40 Labs registered in 1931, and went on to become the number one dog in AKC registrations for over the past 2 decades. The Labrador has become the world’s most popular breed, described by every breed standard and registry in virtually identical terms throughout the world. There is no Labrador Breed standard which describes any color other than Black, Yellow, and Chocolate.

It was not until 1985 that the AKC registered the first “Silver”, which heralded the incestuous practice of inbreeding siblings, parents and offspring, etc. by an individual to “establish” dilutes. The dilute lines can all be traced back through pedigree information to two particular dogs from a kennel in the midwest during the latter part of the 20th century. The overwhelming consensus among breed experts from legitimate Labrador Clubs, the position of these accredited Labrador clubs, and a growing number of recognized purebred dog registries, is that the dilutes are the result of a cross breeding, with Weimaraner being the source of the dilute allele, and are therefore not registerable in a purebred registry

The Newfoundland dog during the days of the St. John’s dog was not the contemporary breed as we recognize it. The Newfoundland is a distinctly Canadian breed and yet even today, the Newfoundland in Canada remains true to its origins and only comes in two colors, Black, and Landseer, neither of which is dilute. The dilute allele was likely introduced into the Canadian Newfoundland after it was exported to Europe and crossed with mastiff breeds after the Labrador was already established as an individual breed. Since the first Chesapeake Bay Retriever (a bitch) was imported to Great Britain by Dr. Helen Inglesby in the 1930’s, this is also evidence debunking the claim that the Labrador was developed by crossing the Newfoundland with the Chesapeake Bay Retriever, and is patently not accurate.

Despite multiple references to “research” gleaned from a particular silver breeder site, none of the writings on that site are credible since most of them are grossly inaccurate or outright false. In addition to erroneous information on breed purity, the genetics involved in producing dilute carriers and dilute affecteds, another example is the claim that dilute labradors are accepted and recognized by most clubs, veterinarians and registries. The author includes the ANKC, the CKC, the UKC, the NKC, the FCI, and the NZKC, which, in fact, prohibit the registration and breeding of dilutes. Any dog falsely registered as a recognized and accepted color in many of these registries will have the registrations revoked, progeny will be revoked, the dog will not be exportable or breedable, etc.

The bottom line is that with the presence of so much incorrect information being cited as “fact” any of the information being put forth by dilute promoters needs to be treated with extreme prejudice and skepticism. We have all seen the outright lies which come so vehemently from the dilute supporters. Why anyone would blindly believe anything else coming from them defies wisdom and logic.

There was never any mention in the meticulous and exhaustive breeding records, whelping logs, descriptions of markings, colors, etc., and stud books kept by gentlemen of unimpeachable integrity, of any dog being produced that was, in fact or in fantasy, a dilute. Not in ANY of the retriever breeds developed from the St. John’s dog during that time in Great Britain. The dilute allele was introduced after the establishment of the recognized breeds. In the case of the Labrador, this introduction occurred in the USA during the latter part of the 20th century. Chocolates and yellows, regardless of their popularity and unlike the dilutes, have always been recognized as legitimate Labrador Retrievers and have NEVER been a non-accepted color or a disqualification. The earliest days of the St.John’s dog, and the development of the Labrador Retriever breed, are not recorded with enough authority to be absolutely reliable. It was not until the Duke of Buccleuch and the Earl of Malmsbury dedicated themselves to maintaining meticulous breeding and whelping logs that we have reliable records, and on these we must rely and be forever thankful. 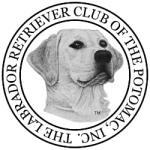 © 2023 The Labrador Retriever Club of the Potomac Inc.
Website by ExedeDigital.com